Photos of the Experience

EventsTag, a pioneer of experiential technology, recently developed a new gaming mechanic aimed at giving event marketers a tool to giveaway prizes. Social Slots, as they have been named, engages potential winners by having them take photos or post on social media to have a chance to win. The fun and interactive method was first released in mid 2016 and took a big leap with the #LGGAMEDAY College Football Tour that saw over 2,000 posts, awarded 100 prizes and reached over 60,000 people.

“Social slots is a great way to enhance the overall experience for the consumer. It provided added entertainment and a way to connect beyond traditional means,” said Ben Wibly, Account Executive at Advantage who worked with LG for stadium gameday activations at Clemson University, University of Illinois, and University of Maryland.

College sporting events are full of brands trying to make an impression, but LG didn’t want to be a part of the clutter.

They came to us to help them stand out at the stadium by creating a thrilling consumer experience in their footprint that also provided a digital memento to fans whilst capturing attendee data for lead generation.

Now with March Madness upon us, LG is slated to continue their success with Social Slots into the basketball season by bringing the game to the NCAA FInal Four Fan Fest in Phoenix. Regardless of the state of their brackets, fans will be able to post their moments in order to have a chance to win incredible prizes throughout the week long basketball extravaganza.

Essentially, Social Slots helps brands both giveaway prizes and engage users with flexibility and ease. Since the initial release, the gaming product has been used by to give away thousands of prizes, at dozens of events, for some of the largest brands in the world. This March EventsTag is rolling out the next major update to the Slots platform, including multiple game types, enhanced visual animations, and a robust prizing management system in order to meet the increasing needs of larger scale campaigns.

“Social Slots has been an excellent addition to our product line-up and opens up so many other opportunities with contests, takeaways, and gaming. We see social slots and other social gamification as the future of giveaways because they add value for the brand by generating content and having increased user interaction,” said Dan Strang, CEO at EventsTag. 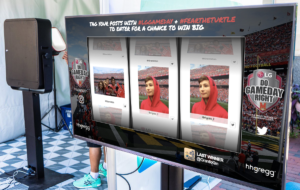 Founded in London in 2012 by CTO Ollie Harridge and CEO Dan Strang, EventsTag is a browser-based live display platform primarily intended for use at events and venues. In 2014, we expandaded our company to have offices over the pond in the U.S. with offices in NYC, LA, and Chicago. From there, we have been able to do much more than a social wall. From our Social Gaming, Hashtag Postcards and Green Screen technology, we work with brands, agencies, and event planners to make sure our clients social media engagements are going through the roof.