Welcome to the first article in our new series, Matchmaking Stories from techsytalk LIVE, chronicling the matchmaking power of our annual marquee event tech conference and showcase.

Just completing its seventh year, techsytalk LIVE (formerly known as Plannertech) has established itself as THE place to learn about the latest resources and best practices for using technology in the event planning and meetings industry. In addition to its awesome educational content, the event has become a hotbed for community building and collaboration. We are thrilled to bring you the first in what we hope will be a long series of matchmaking success stories that started at techsytalk LIVE.

Our first tale involves two of our regular techsytalk LIVE presenters, Clara de Soto, Co-Founder of ClearHart, now SVP of Business & Product Development at Event Farm, and Brennan McReynolds, COO of Event Farm. Did you catch how they are both at Event Farm now? Let’s take a look back and see how that happened.

In 2011, Clara, along with Co-Founder, Erica Mannherz, founded ClearHart, a full-service innovation agency devoted to bridging the digital and non-digital worlds. They created turnkey wearable tech programs for some of the country’s largest events, including the Manhattan Cocktail Classic, San Francisco’s Outside Lands music festival, and the South Beach Wine and Food Festival. They even developed a nifty app called Killswitch, that allows you to remove all traces of your ex from your Facebook page, “making breakups suck less.” Then Clara gave a presentation at last year’s techsytalk LIVE conference, titled, “Wear” is the Engagement?! Leveraging Social Media, NFC and Wearable Technology at Your Next Event. Little did she know, but sitting in the audience was Brennan McReynolds.

Brennan is the COO of Event Farm, an event marketing platform offering invitation, guest registration and digital activation services. Their extensive client list includes the likes of Google, Facebook, Yahoo, Wired, Mashable and Buzzfeed, to name a few. During the time that ClearHart was developing their wearable tech, Event Farm was slowly moving into the experiential space with its own branded digital experiences for corporations and organizations. When he listened to Clara tell about the work that she and Erica were doing, Brennan knew there was a conversation to be had.

I spoke with Brennan and Clara this past week, and they talked me through the story of how they met and what’s been happening since.

Brennan – Here we are in the marketplace talking about heads up engagement, and that life should be more exciting than looking at your phones during an event, and that true data is when we’re interacting and engaging with people. Then here’s this woman who stands up on stage and says the exact same thing, and it was like, Holy sh*t, they exist! There’s somebody else who gets this and can truly articulate it and is passionate about it… So that’s when I tweeted out, nice work, we gotta talk, and Clara quickly responded, and she happened to be sitting behind me, and that was the first nerd out session of what ultimately became the team and the partnership that we have now. 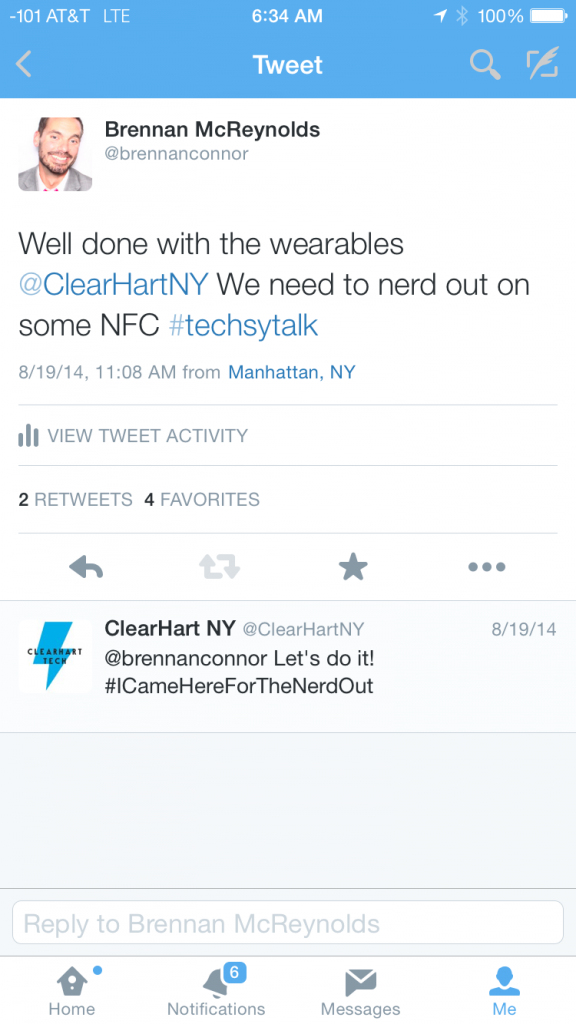 Clara – We were really digging deep into what Brennan was mentioning, that “heads up” movement. With Clearhart, we felt a deep ethos around making sure that human behavior was dictating the technology and not the other way around, and that was kind of guiding the majority of our activations and projects. For instance, we created an app that removed traces of your ex from your Facebook profile… I actually have a 15-year-old sister, and seeing all of her little friends and how they engage with technology… seeing the real human behaviors there, that people want to digitally capture their special experiences, we sort of felt a bit of a calling about how to respond to that natural human behavior in such a way that wasn’t everybody at a concert holding up their phones and experiencing that concert through their phone screens as opposed to in the flesh.

Both ClearHart and Event Farm were gravitating towards the use of NFC, or near field communication technology.

Clara – It’s a chip, similar to RFID. It’s a chip that allows pieces of data or content to pass between two objects. An example of that is Apple Pay, or Google Wallet – an NFC reader that’s in your phone that when you tap it to a device, you’re able to pay… EZ Pass is [an example of] RFID – radio frequency, so it’s long range, but NFC, you have to be near… It’s funny, both Event Farm and Clearhart had the same draw towards NFC vs. RFID. I’m sure you’ve heard a lot about RFID and how it’s used in the access control space, at large festivals. We were both independently drawn to NFC because of the active participation that it requires. You know, we’re not passively tracking people like they’re a bunch of cattle, instead we’re creating active touchpoints throughout an event experience that are intuitive to that space, so that attendees can actively be like, yes, I want to learn more information about X, or I want to actively check into Y, as opposed to us sending a push notification… I have yet to meet a single person who has gotten really psyched about a push notification. NFC, near field communication – it’s a chip that allows two devices to talk to each other. When we use it, we’re putting that chip either in a badge or a wrist band. I mean literally we could put it anywhere, in a decoder ring.

These two companies were definitely moving into similar spaces with their respective NFC projects: ClearHart’s Savor Band, which was used to great advantage at the 2014 New York City Wine and Food Festival, and Event Farm’s New Media Party, showcasing their digital gifting wall, as well as the announcement of their new HOVER platform, a fully integrated suite of digital services and apps.

It didn’t take long for these two powerhouses to realize that they should join forces. Clara, Erica, Brennan and Ryan Costello, Event Farm’s CEO began a series of meetings that sounded suspiciously like a romantic courtship. There was even a competing suitor in the form of another company who wanted to acquire ClearHart. But in the end, Clara and Erica decided that Event Farm would be a better home for them. On July 22, Event Farm announced the acquisition of ClearHart with the headline: Experiential Marketing of the Future: Bringing the Internet of Things to Experiences. As part of the deal, both Erica and Clara have been brought on as SVP’s of Business and Product Development to lead their HOVER and other new product development, new business and the direction of the experiential products as they continue to grow.

And it all started at Convene, during techsytalk LIVE. As Brennan says, “You meet your people, right? And that’s why I believe in the power of what Liz has built… If you really get into this space, that’s where you go to see and meet your people.” And as Brennan also correctly points out, there are many people in the industry who could be possible collaborative partners. The key ingredient to the success of such a relationship is a true alignment towards a shared ultimate vision, or some other urgent call to action.

Brennan – It was also validating, because then you realize, maybe we’re crazy, right, now we’re not crazy and alone… We’re not totally in this by ourselves, there’s other people who are equally as into this as we are…

And as I like to say, crazy with company is always better than crazy alone. 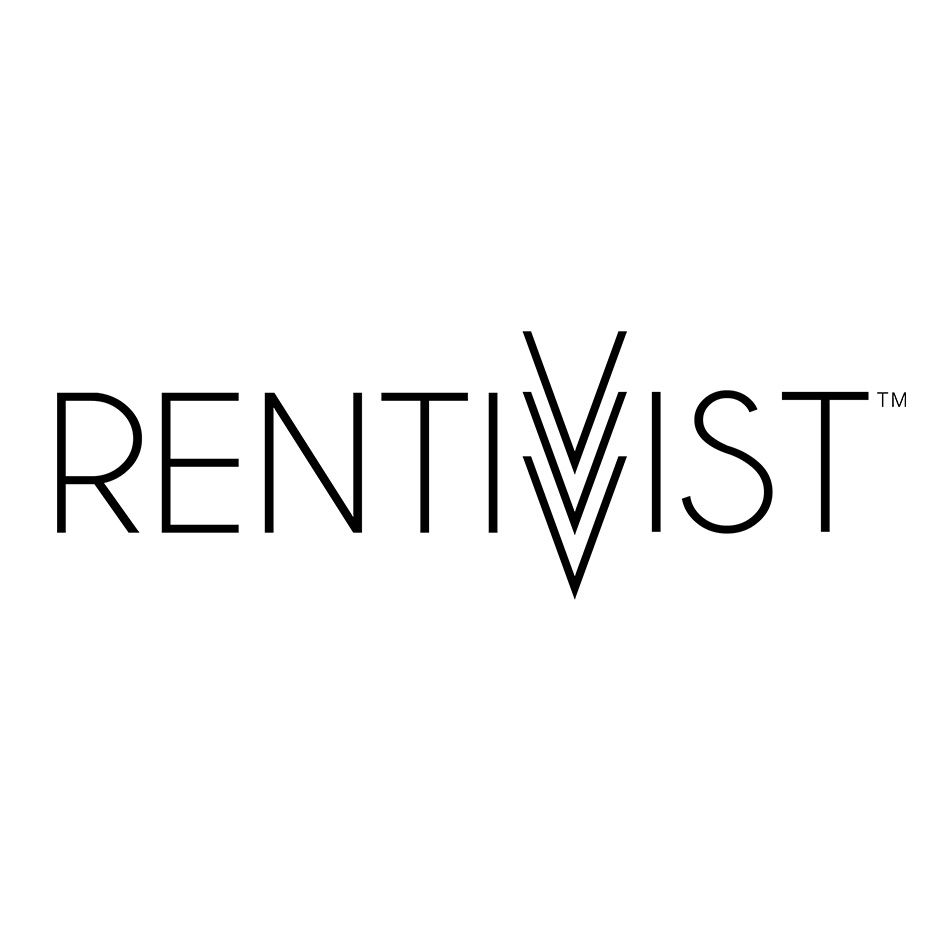 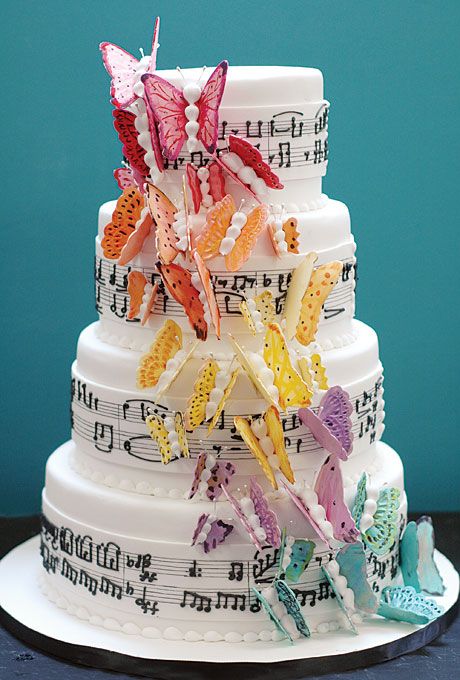 We Pinned It: Cakes
Next Article